I bumped into Calaguas while surfing the net for some Philippine Beaches,  learned that it is in Camarines Norte & Ma'am Cinch is from Camarines Norte so I bugged her about it.  Last May, on our first attempt, the typhoon denied us from reaching the island, but we had Plan B where we still had fun without the sun. This time, our second attempt was succesful. Calaguas is calling us, so we had to heed the call.

The jeepney picked us up from Yu Residence and met up with fellow travelers.It's a beautiful sunny day and we are all excited. We boarded a big boat at Vinzons, sailed along the still green river which is embraced at both sides by lush Nipa Palms. It's a very laid back scene. We even passed by a very long span of beach on the left, not with white but beige sand. It's a full two hours travel so we had time for chit-chats. Ma'am Cinch chatted with the other group. Ate Avic & Kuya Peter counted their zzz's. And I chatted with the boatman. If I remember it correctly, he is from an island near Calaguas. He said there are also beautiful beaches at their place waiting to be discovered. 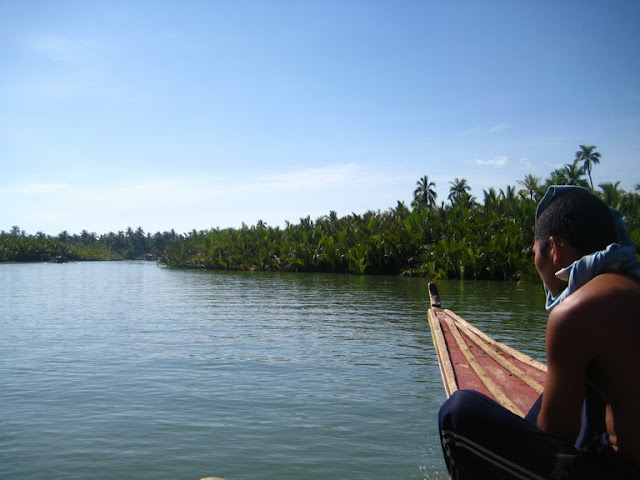 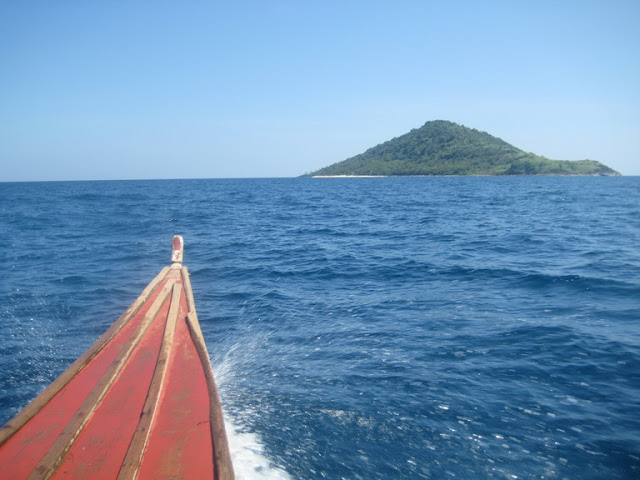 Though I wasn't swimming, I ended up getting wet during the boat ride. The sea water kept splashing on me & I was in front so I was more wet than anyone else. My hair was all tangled up . And when the seawater dried up on our skin, we can see the salt powder. We had a side trip to Maculabo Island. The water is very clear and inviting. It's a "very" tropical scene. How I love to be left in such island for a week or two.
A few minutes later, we entered the sea surrounded by islands and islets. The shoreline has vast white/ light beige sand and hills green with short grass. There are only few trees. It's a beautiful scene, the water's color ranges from deep blue, to emerald, to a very clear one. I was impressed. Compared to the website photos, they are for real. The very cute Ayel, our 3 year old travel protégé said as soon as we landed," I love it!". I know everyone would love the place. 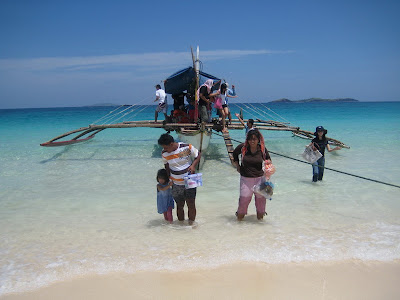 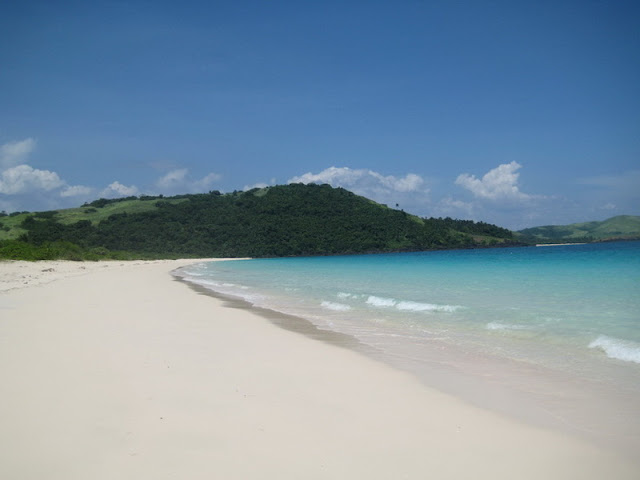 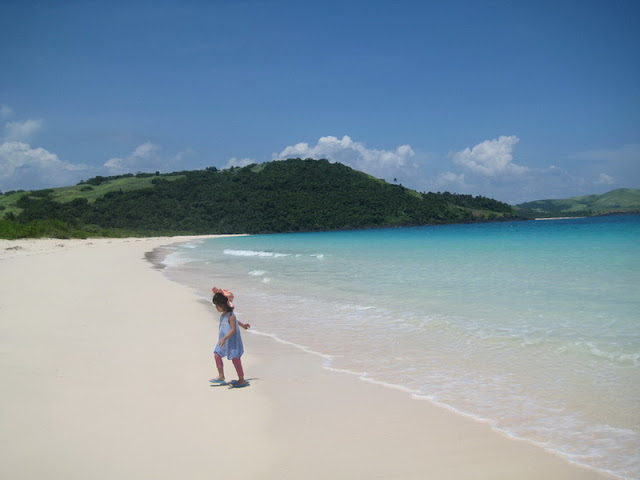 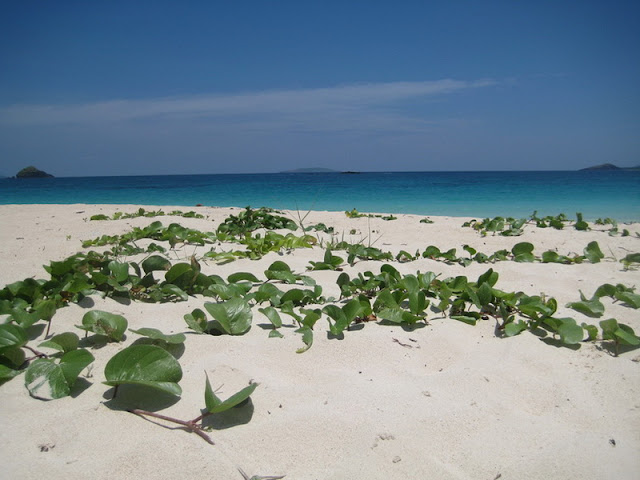 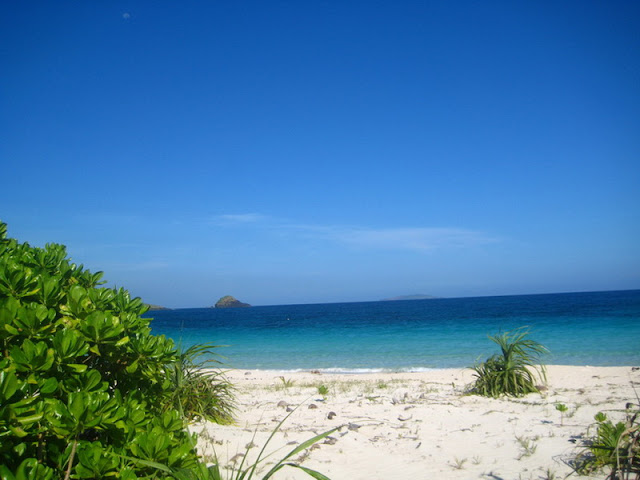 Everyone gathered under the trees. They pitched the tents, took photos and the others cooked lunch. I can't sit in one place so under the heat of the sun, Ate Avic, Kuya Peter, Ayel and I walked along the beach, to the southern part. The only footprints in the sand are our own. The shore is very clean. There are little hermit crabs everywhere. The sand varies from fine to grainy. At the end of the beach, there are dark volcanic rock formations with small barnacles attached to them. It's a very nice spot. 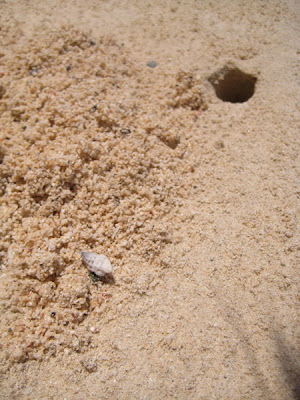 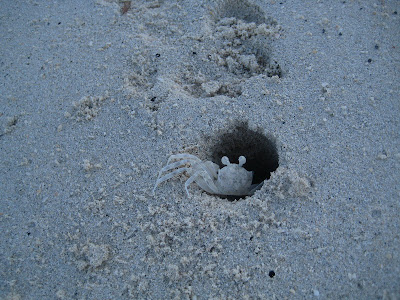 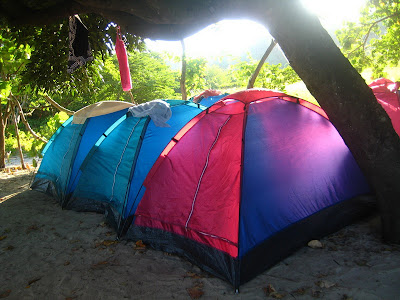 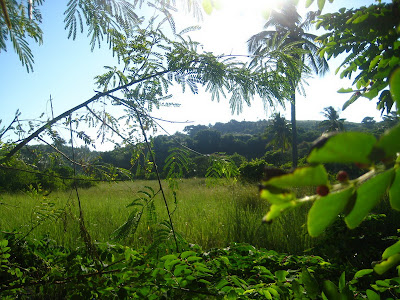 We arrived at the camp site, when everyone has already ate their lunch. We ate grilled tuna that time. After lunch, Ma'am Cinch and I found a comfy spot under the trees on the Northern part of the beach. We spread our tie-dyed wrap-arounds on the sand. I used a big round coral as a pillow. We had a short nap. I really got recharged. I had a tough time catching sleep during the bus ride. When I woke up, I saw Kuya Peter holding on to large shells. We followed them to the other side of the beach. We were surprised to see that just around the massive rocks, there is a long stretch of unsploit beach. 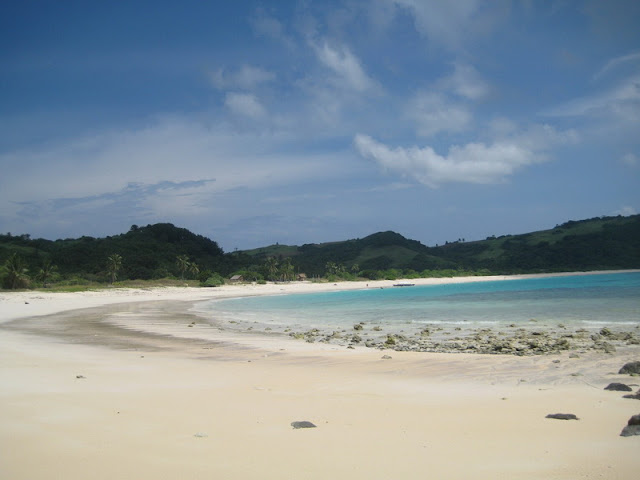 That afternoon, we waited for the Sun to be kind to us before we hit the water. Because for only a few hours, we already turned red. We swam until late afternoon, we lounged at the beach waited for the sunset.  What's better is we had a beautiful sunset matched with a rainbow. 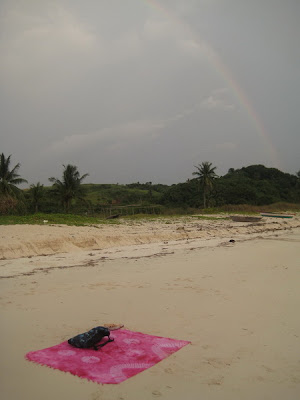 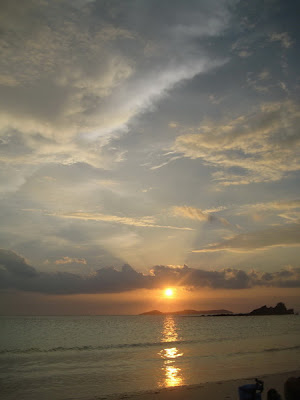 After dinner, most of them gathered in front of the bonfire with their tell tales but I opted for a quite activity. I lay down under the carpet of skies and the sand was my bed. Ma'am Cinch accompanied me. I saw lots of shooting star then but the stars are not as vivid as I like them to be. We headed back to the tents when the cold wind started to chill our spines.

On our second day, I woke up at 4:30am, alone I ventured on to the Northern part of the beach. When other people go ga-ga over sunsets, I am more attracted to Sunrise and moonrise. I think it is enigmatic and powerful. It wasn't so dark then, and I only saw a few people up. The tide was high enough at the rocks. I thought twice of crossing to the other end, because i didn't know how high the tides would be. Good thing I met a boatman searching for a cellphone signal and he assured me that the water won't get higher than that. I had an eerie feeling on that dark rocks. I almost didn't push through with it. I just told myself, I may not return to the place so I shouldn't pass the opportunity, so I headed on, jumping and crawling up the rocks. I found my spot & I had my God time as I waited for the sunrise.

When the sun was up. I started to trek back then I saw Ma'am Cinch and Ate Avic headed my way. They were there to inform me that we were leaving at 10am that day. After having a  breakfast of fried milk fish and boneless dilis, we headed for the water. It was truly nice, with small waves and the water is very clear. It's as if you just want to stay there the whole day. We just had to stop when I felt my skin burning. I took a bath at the shower room with the water delivered from the well which was five minutes away. An old man carried two containers of water on his back. I was a bit concerned by it, I said he should have a horse. If I had a power to give one to him I really would. 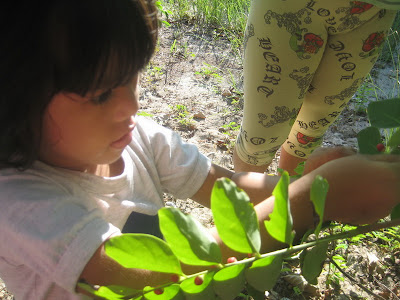 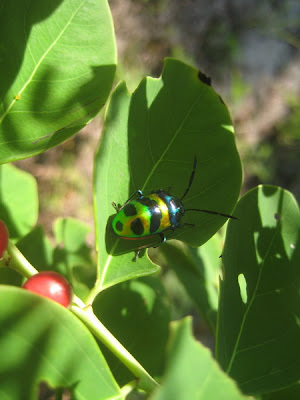 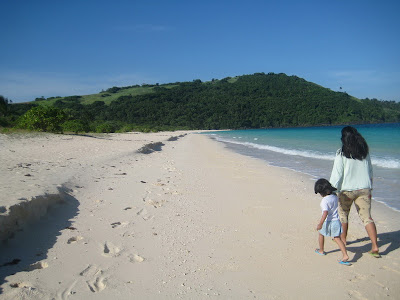 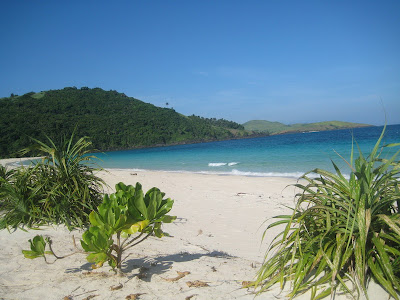 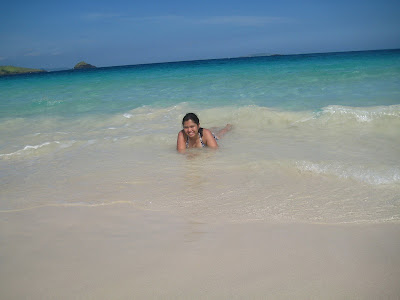 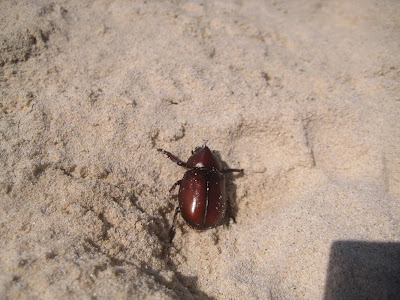 We had to return to the main land before the low tide or else we won't be able to pass through the river. That afternoon we planned to go to Cayucyucan.
Posted by Zepy at 6:27 AM