We woke up early, walked along the black sand beach at the back of the hotel. It was nice. The water clear, the breeze was a bit warm but very pleasant. We rented a van to take us to Dakak Beach Resort. We were afraid to take the "single" motorbikes. There are several road widening construction.

In Dakak, we ate a fabulous and very filling breakfast. After which we spent hours on the water/beach. The bits and pieces of small trash was a bit of a drag. It was due to the Habagat, so the trash from the nearby areas are blown towards the cove. Hmmm, I wish they can do something about it. The sand is white but there are black sand combined with it, that's why it turned out to be a bit beige in color. The resort is nice and the staff accommodating. There were few tourists. 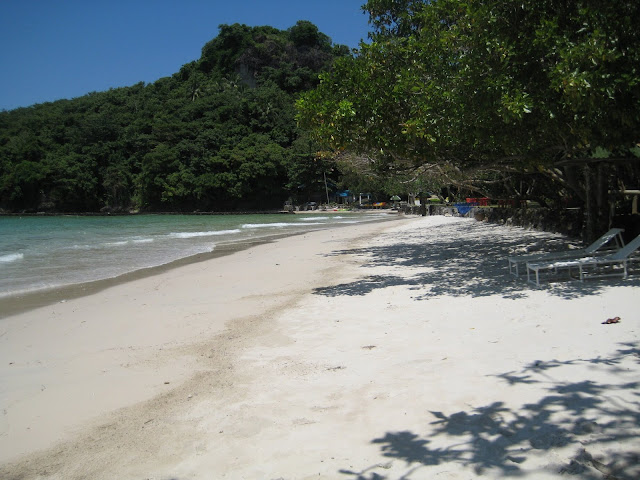 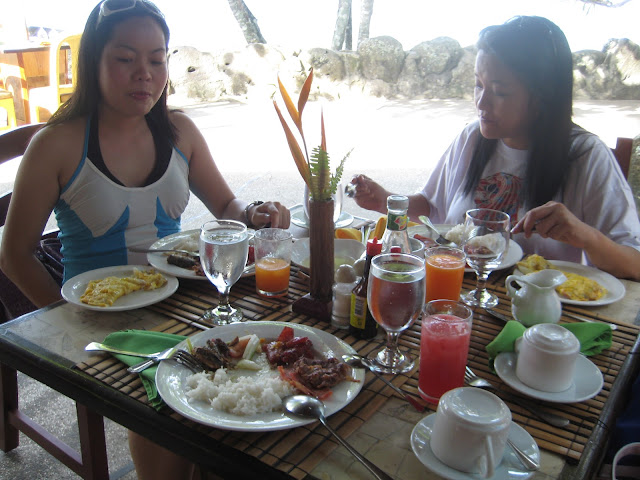 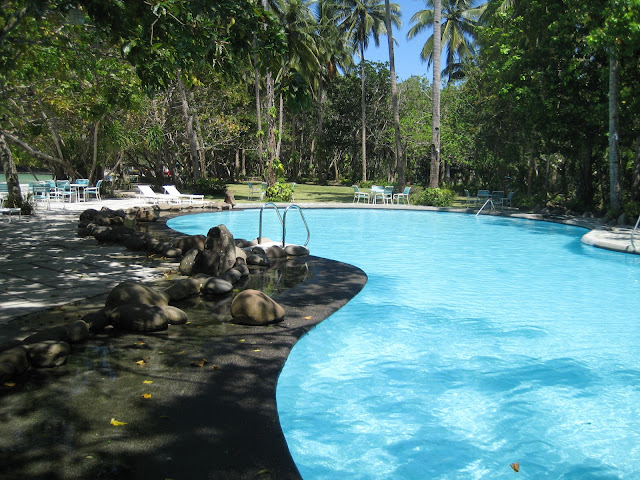 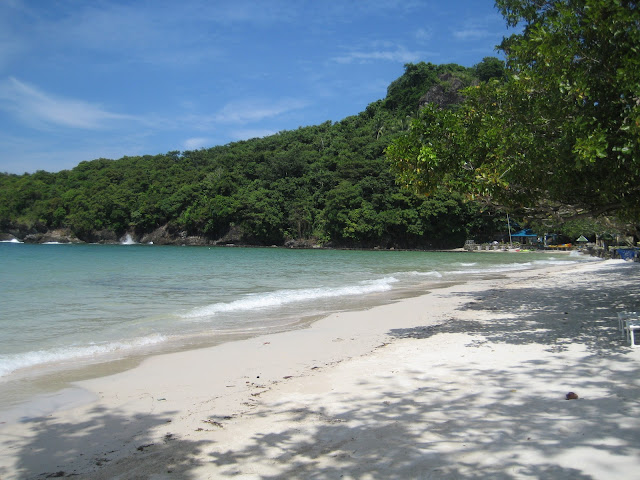 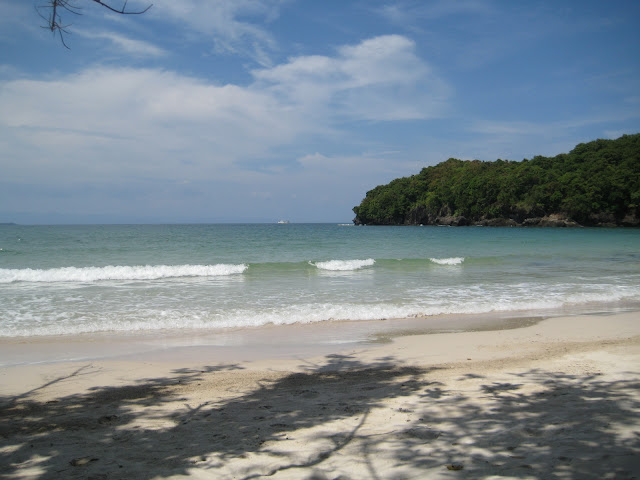 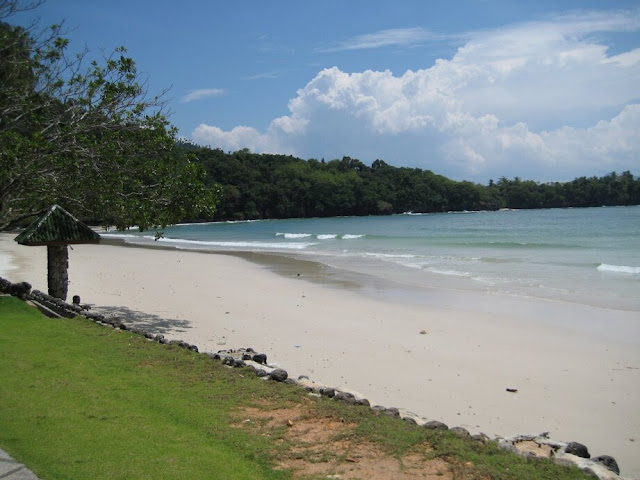 That afternoon, Ma'am Cinch and I ate a late lunch. She enjoyed her salad and I enjoyed my sizzling squid. That afternoon we also enjoyed our banana splits, took a short nap, then spent the whole night at the pool.The food in the hotel is really fantastic.

It was just a short weekend getaway but it is worth it.


3rd Day, Last day Early in the morning, we took our pics at the beach. Spent time again at the pool, then ate our heavy breakfast. We took the mini-bus to Dipolog City. We hunted for the great "pasalubong" but all we bought was there "Spanish sardines". It is a bit spicy and it tastes good though. We didn't have time to explore Dipolog, missed the Silinog and Aliguay Islands. Maybe on the next trip. It was just short weekend getaway but it is worth it.

Dapitan is a place where you can really relax. A place so laid back. The place isn't commercialized yet. Everything is fine as it is. No rush, no traffic, no pollution and everything's not so priced up. I will probably come back... soon.

1st Day
We met up at the new NAIA #3 airport. It was a lovely Friday when we took our plane to Dipolog, located at Zamboanga Del Norte. It was lunch time when we reached the city. The weather there seemed like summer.  We ate at Hyatti Restaurant. The food was OK, and not so filling. 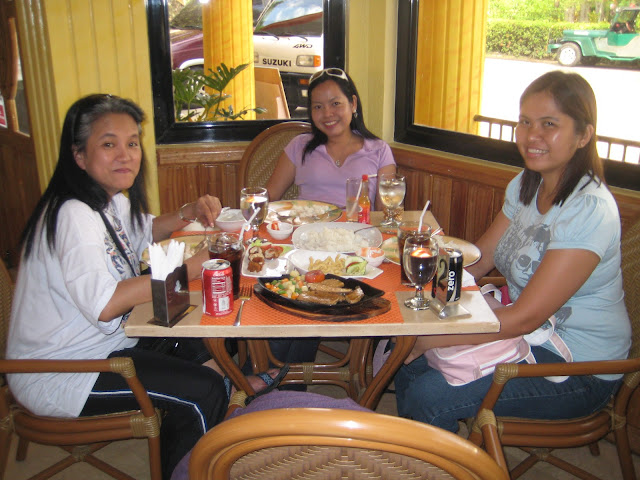 We took a mini bus to Dapitan. Dipolog and Dapitan are known to be "Sister Cities". The roads are paved, and there are not much cars around the city. It was so laid back, especially when we reached Dapitan.  Dapitan is a coastal city. It is located alongside the shores with black sand beach. It is breezy. I like the place, it so serene, a kind of place where you can live if you want some peace and quite. 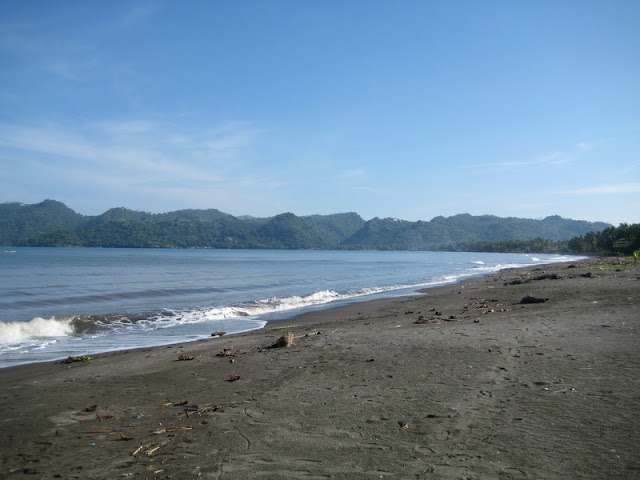 We checked-in at Dapitan City Resort Hotel. It is city-owned. The room is cozy and it opens up to the pool area, which we kind of have all to ourselves. On our first day, we visited Rizal Shrine. It is where Rizal, our national hero was exiled for a few years. There are several huts/casas. It actually has complicated Spanish names, but can't remember them. All I know is there are some clinics for boys, for girls, etc. They even have a replica of the home he built. There is also the pool he made, which seemed eeky.  He also provided aqueduct. 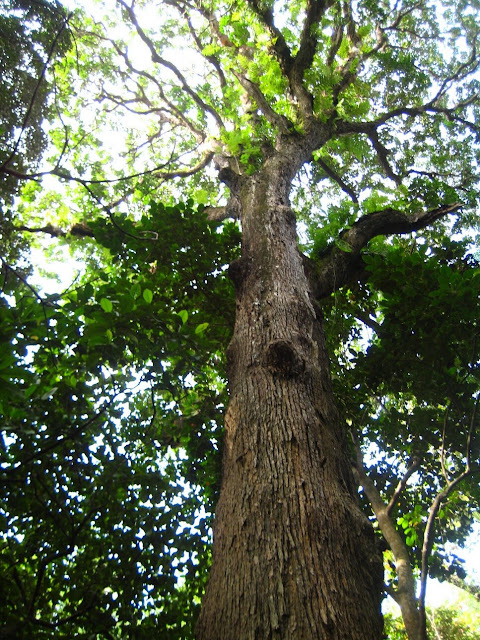 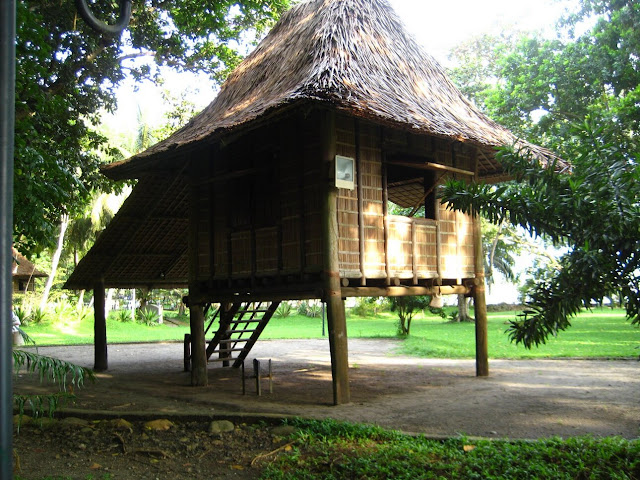 We get to lounge a while at the amphitheater fronting the sea. The one thing I remembered was the Me Retiro Rock, the massive rock where Rizal and his wife Josephine Bracken find time for romance. Ms. Bracken is an Irish girl, adopted by a general. They lived in Hongkong, and she took him to Rizal to cure his failing eyesight, because Rizal was a well-known ophthalmologist. Then they fell in love, lived in Dapitan. She had a miscarriage then Rizal buried the baby at his Talisay estate.  There are several ladies wearing white that day, the guide told us that they are Rizalistas. They revere Rizal more than a hero. I think they have their own religion. It was a bit scary finding women with long white gowns a midst trees. It reminds me of fairies or white lady. 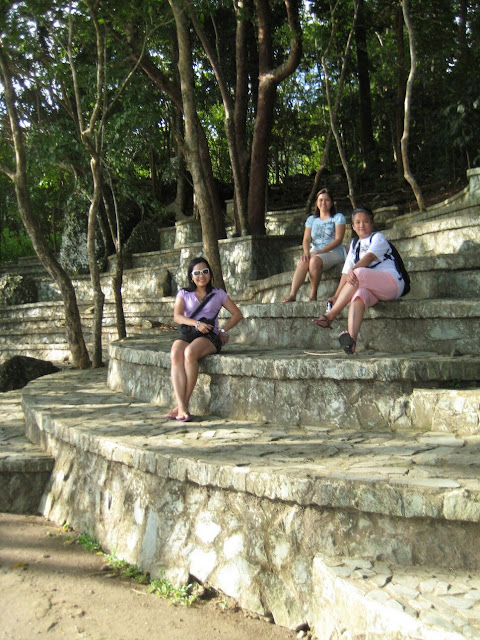 Next stop, we went to St. James Cathedral. The exterior is not painted but the interior is interesting. I was really curious with how they painted the church ceiling. The design  were spiral and checkered at the same time. It has a vibrant orange color. I think it's very unique. There are also angels holding round fluorescent lighting fixtures. It is kinda cute though. The Mindanao Island relief is located in front of the church. 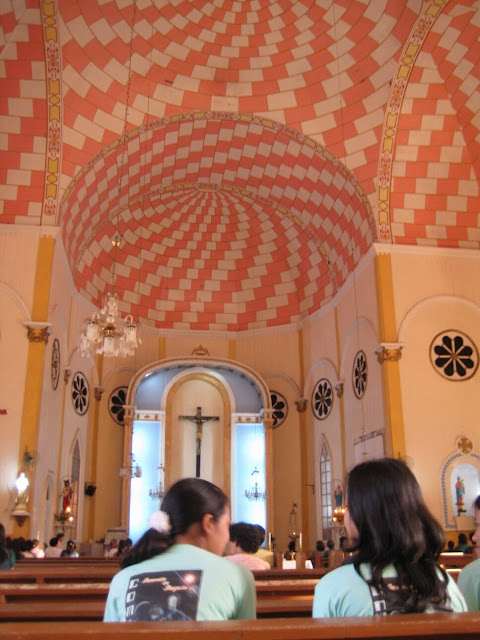 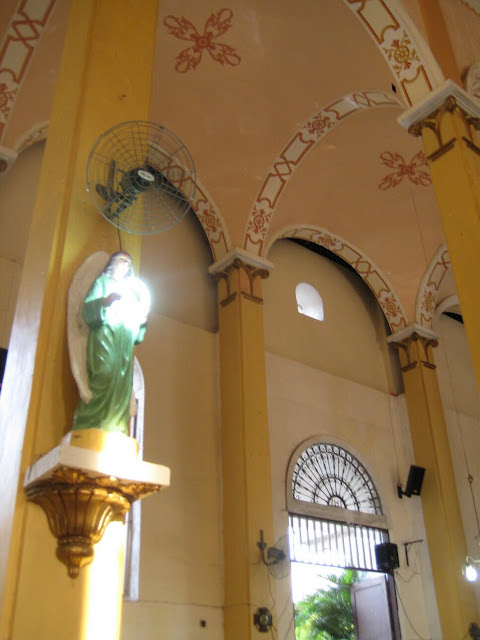 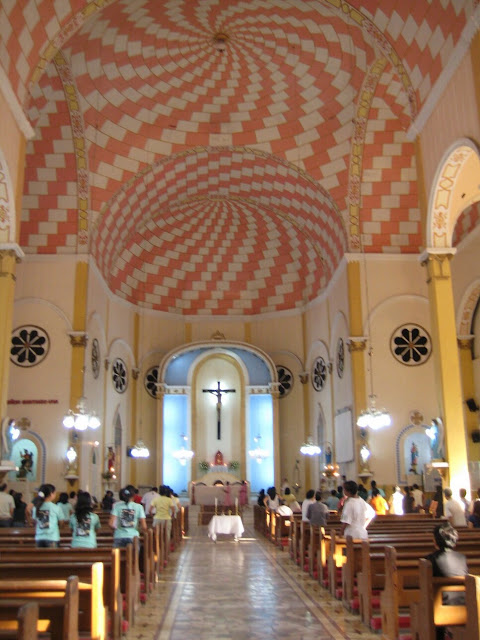 We were strolling along the plaza, then we saw this very green sprawling grass. We sat and took photos. It was inviting to lie there on the grass, but it made my skin itchy. And what else to see in the plaza, of course a Rizal Statue. The kids there are having so much fun playing in the grass under the big acacia trees. 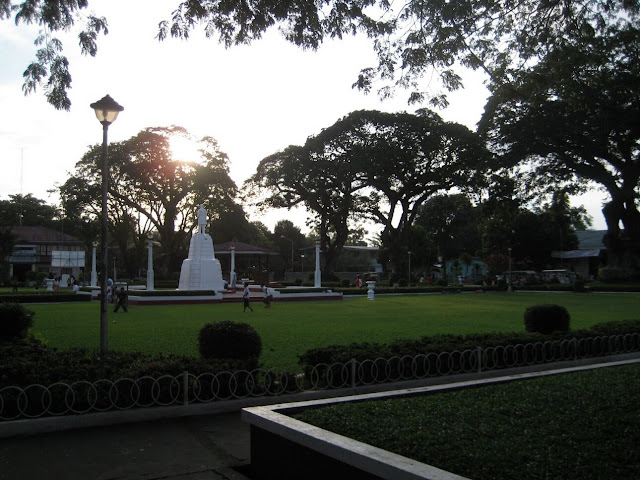 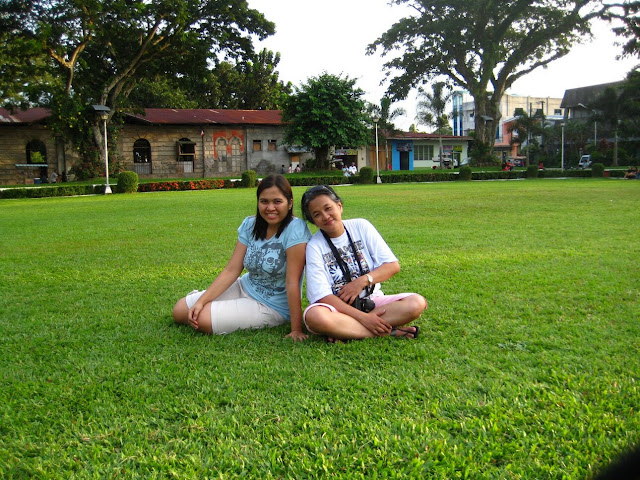 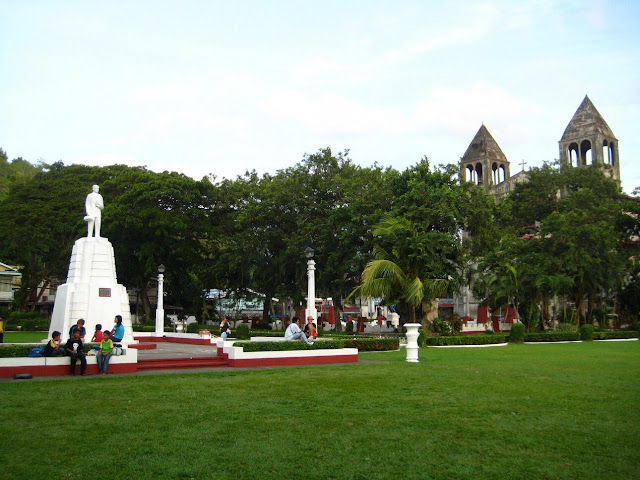 One more thing, we saw a very interesting waiting shed that even Mr. Bayani Fernando can't beat. Where on earth can you find a waiting shed with a "garden" on top of its canopy. I'm not even sure if the slab can carry the weight of those big rocks. It's totally cool. It's so much fun just walking around the city. It's clean, not much vehicles on site and no pollution. 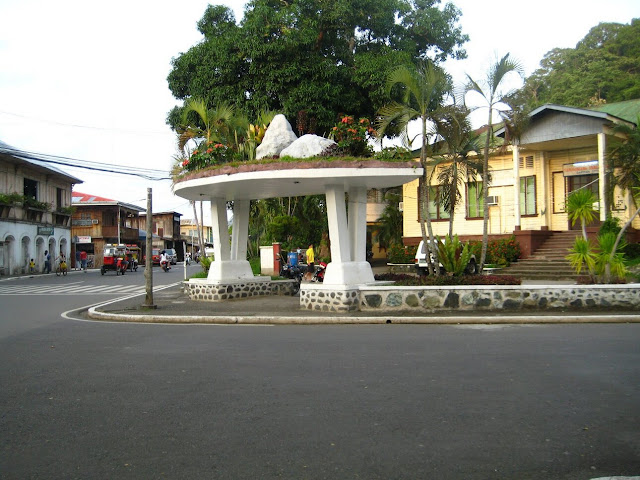 We even passed by an ancestral home. The Adasa home built in the 1900s. It's pure hard wood but there are not furniture inside. 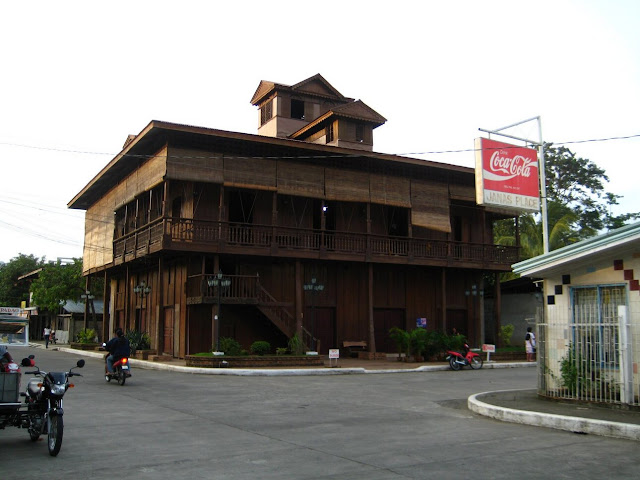 We bought some "puto" and bread at the local bake shops. The puto was baked to kill. hehe. I felt like "snow white choking on an apple". When I ate the puto, as if it turned into bits of sand in my throat, that I ended up coughing it up for a long time. It felt like it was spreading into my lungs. We even saw "pan de lechon". A raisin bread shaped into our native delicacy "Lechon". I think it is a better option if you don't want the cholesterol provided by the real lechon. 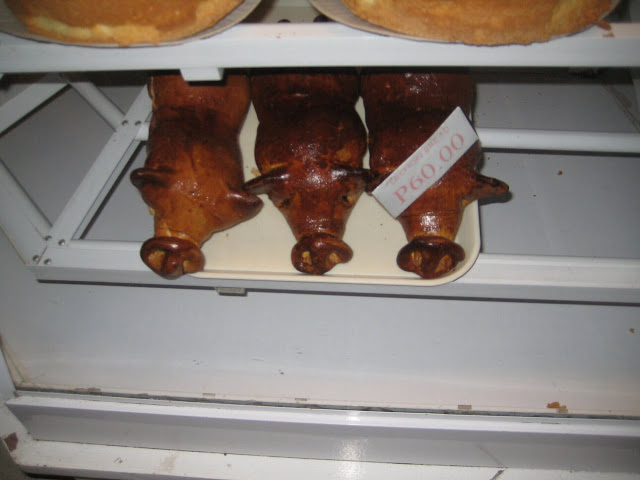 We did enjoy the "3-5 peso" merienda. Not in my dreams that I find a cheap snack. Ma'am Cinch ate Maruya(bread with banana), Grace ate hot cake and I ate butchi. I thought is has langka, but it was just banana filling.

That night we went to Gloria De Dapitan. A well known leisure park and commercial area. To our surprise, there was a big "Sabungan"(Cock Fight Coliseum)  in the center. It was the main attraction. We ate our fabulous dinner at "Kamayan Ni Manay". The food is very affordable. We ate sisig and sinigang na hipon and something like calamaris but they only used the small tentacles. It's yummy and crispy. 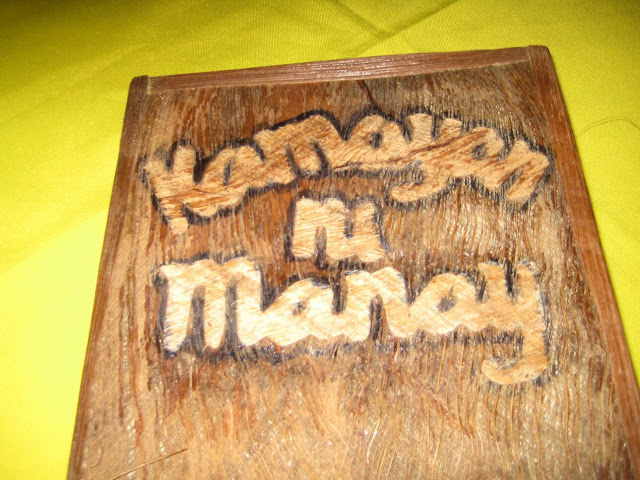 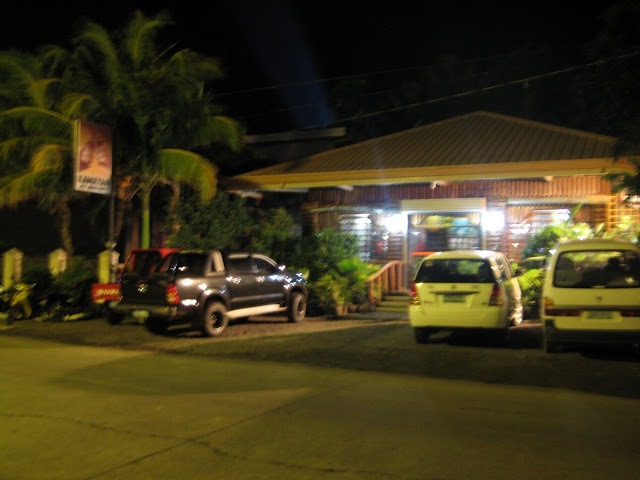